Famous Dave's of America is a chain of barbecue restaurants serving pork ribs, chicken, beef brisket, and several flavors of barbecue sauce. Dave Anderson, an Ojibwe who served as the head of the federal Bureau of Indian Affairs from 2004 to 2005, started the first Famous Dave's restaurant near Hayward, Wisconsin in 1994. The restaurant chain grew throughout the Midwestern United States, and Puerto Rico in 2014. It has 200 locations in 34 U.S. states and one Canadian province, as of December 2012. 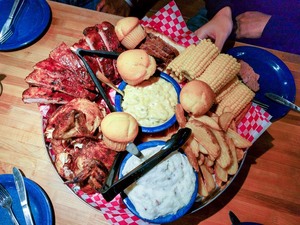 Dinner at Famous Dave's with Mike and Danny

It's dinner time with the guys. Danny had a hankering for some ribs, so we decided to go to wherever was still open at 9 PM. That left us with limited options, so we had to choose between Lucille's or Famous Dave's. We ended up choosing Famous Dave's, which turned out to be a good choice.

Mike met us at Famous Dave's shortly and we ordered the All-American BBQ Feast. This feast includes "a full slab of St. Louis-Style Spareribs, a whole Country-Roasted Chicken, 1/2 lb. of either Texas Beef Brisket or Georgia Chopped Pork, Creamy Coleslaw, Famous Fries, Wilbur Beans, six pieces of Sweet Corn and four Corn Bread." It's meant to feed 4-6 people for $79.99. We ended up opting for the beef brisket and got mac and cheese and mashed potatoes instead of the coleslaw and beans.

Of all the items in the massive tray, the brisket and the chicken stood out the most. The brisket was so tender that it nearly broke apart as I picked it up. The chicken was both tender and juicy. I was pleasantly surprised at how good these two items were. The ribs were pretty good too but were severely overshadowed by the chicken and brisket. The sides were fairly pedestrian, however, they were still good. We had a debate about which was better: the corn bread at Famous Dave's or the biscuit at Lucille's. I think we ended up split in our decision. I am definitely more partial to the honey butter biscuits at Lucille's but these corn muffins were good too.

Overall, Famous Dave's surprised us with how good their barbecue was, so no regrets!